We Rise and Fall Together: Assessment during COVID-19

I was invited to keynote a faculty gathering at the University of Pretoria. The organisers agreed to “flip” the keynote, and so I am posting here the talk which will inform an online panel discussion on 29 September 2020.

“Nobody can be in the world, with the world, and with others in a neutral manner.” ~ Paulo Freire, Pedagogy of Indignation, p. 60.

As a preface, let me first thank Salomé Human-Vogel for inviting me to contribute this keynote to the important conversation going on at University of Pretoria. It’s always a pleasure to help open what I hope will be an ongoing, progressive, humanising dialogue.

Let me also say that I started to write a very different piece for this occasion, one that began with an adorably self-assured bit about the issues which make up the question of assessment. The direction of this keynote changed abruptly this past weekend.

In The Politics of Education, Paulo Freire wrote:

The theme of an essay is not merely what appears on the surface in words. There is always something hidden, something with a deeper meaning that is the key for complete understanding. Accordingly, whenever possible, writing on or toward real issues entails an extensive effort to see through deceiving appearances that may blur our vision. Often we have to surmount a number of difficulties in disentangling the issues from these appearances so that we can perceive the total theme as an actual phenomenon in an actual world. (111)

We skitter across the surface of the numbers, recognising they are dire, but rarely stopping to ask: is it the numbers that matter, or the afternoon spent in ICU, or the 48 hours spent waiting on test results, or the conversation that has to be had when one family member is sick and the others must stay away. When Freire warns us that we must read “not merely what appears on the surface in words,” but that “there is always something hidden,” he is telling us that the numbers, while appalling and while meaningful, hide the real story. In our case, that story is not education, but the world to which education must respond.

I am writing this in the afternoon after the morning upon which I asked a veterinarian to come to my home to euthanise one of my dogs. Rupert was 13 years old, a sleek, beautiful yellow mutt who spent most of his life running and bounding like a 40-pound canine springbok across grassy lawns and dog parks. When he wagged his tail, he wagged from the hip, swinging his body back and forth in an enthusiastic mamba whenever he greeted us. He had gotten old suddenly last autumn, and his wagging had diminished as his hips grew weaker. He could no longer bound quite as high, but he still did with as much aplomb as his body would reckon.

And this past Saturday, he woke up ill. Wobbly at first, and then unable to stand. After staying awake with him three nights to monitor his progress, his last burst of energy was to claw at the air as though running from where he was tightly grasped to my chest.

My family passed him on this morning. I have been crying too much.

And now I am writing this keynote address.

B. F. Skinner, an innovator of the behavioural psychology that most positivist approaches to education are founded on, wrote in The Science of Learning and the Art of Teaching that “behaviour is shaped and maintained by its consequences”. He believed that, by controlling the environment in which learning happened, learning could be made more efficient, more effective, and that outcomes could be guaranteed. Skinner’s approach has led to evidence-based teaching, which uses data to determine the effectiveness of certain pedagogical practices based on whether students achieve the desired outcomes.

This is precisely the same as testing the reactions of a rat in a maze. In Skinner’s own words: “Comparable results have been obtained with pigeons, rats, dogs, monkeys, human children, and psychotic subjects.”

Collecting data has always been part of the “science” of education, and learners have necessarily been equated with dogs, rats and pigeons all along.

There’s something really deadly going on here, and it has to do with the perspective, or the location of power, from which successful learning (or even what counts as learning or learnable) is determined.

In Spring 2020, my work and the work of dozens of colleagues who have toiled away in the curious but underfunded and underrepresented corners of academe which are digital pedagogy, suddenly became really popular. Where in years past, my dance card for keynotes and workshops was generally that of a wallflower, the pandemic woke almost every teacher and administrator in the world of learning to the necessity of a solid approach to digital education. I and everyone I have secretly colluded with over the past decade were abruptly the voices on podcasts, interviewees in national and international newspapers, documentary film experts, and more. Among their great company, I went from wallflower to voted-most-popular overnight.

Most of my early talks this spring were focused on groups of faculty who were struggling to understand technologies they had never had the opportunity, the time, or the interest to be trained on, and which were now as necessary to education as paper and pen, chalk and blackboard: the learning management system or virtual learning environment, proctoring services like Proctorio and ProctorU, alternatives to traditional ed-tech like Slack, and of course Zoom. This last, in particular, offered so many questions:

Notably, among all of the technologies and platforms teachers had questions about, they rarely inquired about proctoring services. Whether to use them. Whether they were necessary. Whether they were ethical. And that’s because everyone knows that students must take tests. And that if we don’t watch, they will cheat.

Students have rarely been part of the equation in conversations around technologies and their use. They have not been asked what they wanted, what they didn’t want, what they could manage or not manage. Instead, the questions rise from a desire, even a perceived need or right, to control the digital classroom. An assumption that classrooms, and by association students, must be governed.

From this perspective, the simplest answer to “how do I know they’re learning if I can’t see them” is surveillance. An answer that’s in keeping with Skinner’s behaviourism model, and contemporary positivist (or, in the digital, technicist) approaches to teaching. Audrey Watters observes in her keynote for Digital Pedagogy Lab 2020 that:

“According to Skinner, when we fail to properly correct behavior—facilitated by and through machines—we are at risk of ‘losing our pigeons.’ But I'd contend that with this unexamined behaviorist bent of (ed-)tech, we actually find ourselves at risk of losing our humanity.”

Which is why, more often than not, my answer to all of the questions faculty asked was: “Have you checked in on your students? There’s a pandemic. Are they okay?”

Paulo Freire writes in The Politics of Education: “Education cannot occur outside the history of men and women, outside the very social structures that we have created and to which we are conditioned” (113). So, too, when those very social structures are affected by something as significant as a pandemic, education will necessarily respond, either by contracting around its old ideas and resisting the urgency to accommodate the new, or by reflecting upon those old ideas as they encounter the new. Either response is a critical response, exemplifying what Freire earlier calls “the teleological character in the unity of action and reflection (that is, of praxis)” (112). In other words, regardless of the form our response takes, our responding is as necessary as it is inevitable. To think of going on as though nothing happened is unreasonable, untenable. Inhumane.

In the United States, we fretted about:

All of these hold the concerns of education, of the academy and its traditions, paramount over something much more unseen and unstable: the lives of students.

Because we are trying to write the words of education over the real concern of the pandemic, the cracks in our deliberate narration reveals an unseen truth about life during COVID-19.

When we look at how to deal with assessment during and after COVID-19, our response cannot be wrapped up in best practices—or in practices at all—but in process, in discernment, in iterative responding. Responding to the world and not to our traditions. We need to be clear about what state the world is in, and how that state affects education. Because, “nobody can be in the world, with the world, and with others in a neutral manner.”

I drank soda. Ate grapes and chips. And kept open “Chapter Nine: Humanistic Education” in Freire’s Politics of Education. You couldn’t know that. But a humanizing pedagogy might guess at it. Might not be troubled by due dates or correct answers. Might even imagine how to teach through the screen. Might look for the actual phenomenon in the actual world.

How we reimagine assessment when sick and dying dogs, sleepless nights, and cleaning up dog fur are as much a factor as whether or not a student did the reading or writing may be the most pressing question we face as educators.

Jesse Stommel reminds us in “If bell hooks Made an LMS: Grades, Radical Openness, and Domain of One's Own”:  “bell hooks advocates for ‘continual self-evaluation’ both of a student by the student and of a teacher by the teacher. I would add that we should together evaluate our collective work, the class itself, in dialogue. We all rise and fall together.”

During this time of pandemic, the bright shiny leaders of education have had bright shiny words about the opportunities and silver linings that the pandemic offers. Whereas over 30 million people worldwide are infected with the novel coronavirus, and another nearly one million have died from COVID-19, and whereas suddenly-remote education has surfaced the not-new but newly-acknowledged disparities and inequities embedded in education, and thousands of students at all levels of formal learning have found themselves disconnected, hungry, houseless, and too often hopeless, so I don’t think it’s time to talk about silver linings and opportunities just yet. That time in fact may never come.

So, rather than consider the opportunities embedded in this crisis, we should instead consider the responsibilities. The institution of education has never been more challenged than today to recognize the humanity of those it serves: from students to teachers to administration and staff. The dream of education isn’t built upon the framework of rubrics, testing, quantifying—that is its bureaucracy. The dream of education is built upon a practice of freedom, a discipline of hope, and an understanding that we all rise and fall together. 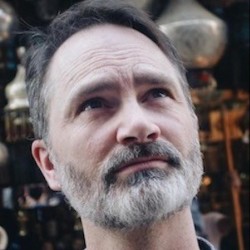